Football is associated with passion, emotion, excitement and dedication across Africa, Europe, America, Asia and other continents. References to extreme emotional experiences at football games characterized all aspects of discussions with fans.
Some referring to the pure joy’ and exhilaration of being at football games. such is the intensity of the experience that two-third of fans have cried at football matches- mostly through joy, but occasionally because of despair. Football provides for many fans an opportunity to let themselves go emotionally to release the frustrations of everyday life.
What defines a fan? To be a ‘true’ fan requires the ‘living’ experience of football. It is not about being a mere spectator – it is about being a participant. Match attendance is a given, of course but there is also a duty to engage emotionally in the life of the team in order to impact positively on a team’s performance. Attending away games is an important ritual for fans involving a number of psychological and logistical challenges. Away supporters are always out-numbered and mostly out-sung.
OFC Dortmund Benin describe ourselves as the ‘ twelfth man’ – as essential to the success of the team as the players and coaching staff. It is the actions performed by fans during the game- the ritual chants, song, banner waving etc. that motivates the team, intimidate the opposition’s supporters. The fans truly believe they must watch their games and support their team to win.
In addition to their passions, pre and post game rituals are important in creating a sense of community among fans. From meeting up with other fans for a drink before and after the game to the orchestrated coordination of fabric squares to make up a large banner, rituals foster a strong sense of belonging to the fan group. What might otherwise be a forgettable everyday action become as meaningful and important to fans as, say, a church mass, and generate powerful bonds. The rituals often have a superstitious quality- wearing the same ‘lucky’ shirt to every game or following the same routine during the build-up even eating two pies just before the kick-off because that made the team won last time.
In Benin Republic where crazy lovers of football have grown to the zenith, where the presence of drummers increase after their teams win matches, where supporters who have not even gone to music’s school sing all about the streets with great skills, horn blowers etc.
All these above factors contributed to the existence of the Official Fan Club Dortmund Benin (OFC Dortmund Benin) through the supervision of the bonafide member of the club in Germany. Our fan club has grown drastically to 1000 members and still growing in a regular bases. Our fan club is where people gather from time to time especially on match days to watch Dortmund matches. This club has grown to the level of accommodating female as club members besides other languages, among the Anglophones.
BVD fan club has a strong passions and emotions that are associated with the game and the positive role that being a true fan plays in the lives of their clubs. 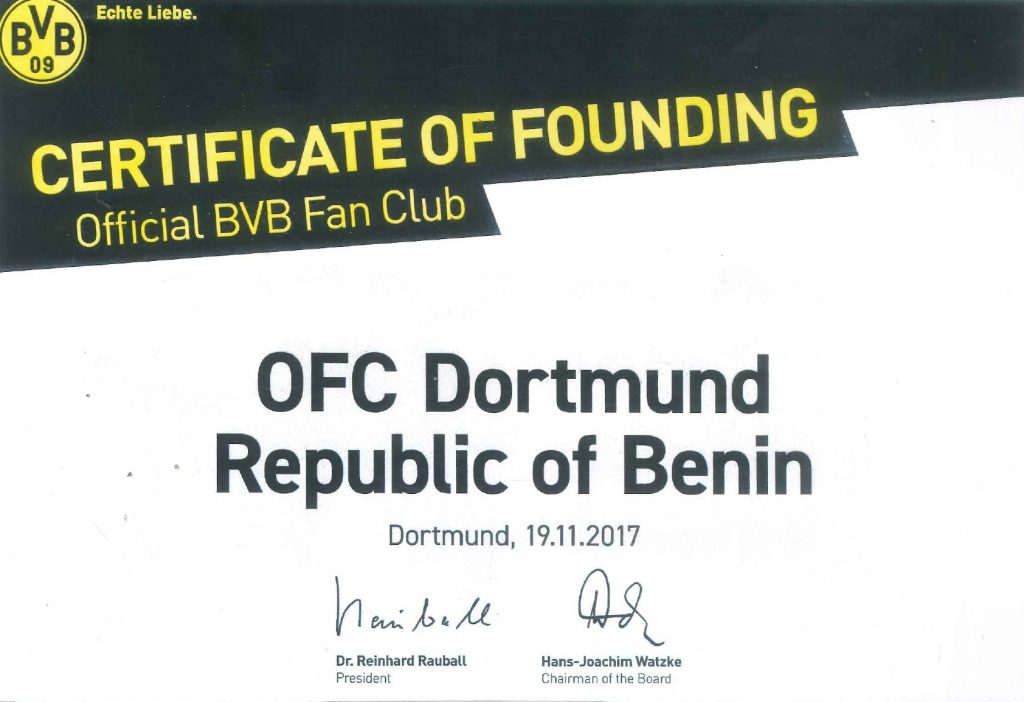